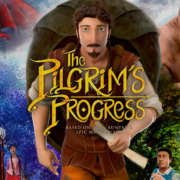 Chance to win tickets and storybook below!

I recently had the opportunity to view a screening of The Pilgrim’s Progress film. Many of us have read the classic allegory The Pilgrim’s Progress by John Bunyan, but my introduction to the story was an adaptation for kids when I was around 10-years-old. I didn’t read much at that age, but have to admit this was one adventure of Christian on his journey that captivated me.

The animated film comes out this Easter weekend for two days only: Thursday, April 18 and Saturday, April 20. In fact, I have two tickets AND a hardcover illustrated storybook for two of my readers. Here’s what to expect:

The storyline doesn’t disappoint as it follows the journey of Bunyan’s classic. The quality/content does.

Here’s the good:
The story is inspiring of someone rejecting the pressures of the culture to pursue something he knows to be true in his heart.

The bad:
Animation reminds me of the rough final of the first Ice Age movie—just before they put on the finishing touches that make the characters more lifelike. Animation is expensive for sure. I feel they went far in getting a film that feels professional, but not quite the polish we’re used to with Dreamworks and Disney/Pixar.

And the ugly:
After about an hour and twenty-five minutes in, there’s a disturbing scene where [spoiler alert] Christian and his friend are held captive and the dialog goes rather blatantly into self-destruction. This is the part that bothered me most. Because the movie is animated, it’s clearly meant for children. And although I understand it to be true to the classic tale, this portion should have been modified given its cartoon format and appeal to kids to be safe and appropriate for families.

LABORIOUS:It just seems to draw out too long overall. Timing of animation is off at parts and probably 20 minutes of film should have been edited out to tighten things up.

The portrayal of Jesus toward the end is also a bit contrived and predictable (and a bit cheesy).

I know I haven’t done much to sell the movie to you. Overall, the redeeming storyline is one we can all relate to with the struggles, distractions and temptations in life that pull us off course from the narrow way. Still, not wanting to be cynical, I wasn’t a fan of this film. If you want to experience the story full force, I believe the theater of your mind reading the classic book will do a much better job and also allow you to edit.

Enter to win! I’ll pick two winners and each will win a pair of tickets and a hardcover illustrated storybook of The Pilgrim’s Progress.

Be sure to join us on social!