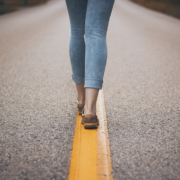 In the past month, the moral line in our country moved substantially once again. And, just like a roadway without lines, a crash is inevitable.

You might have heard that a couple weeks ago, to cheers of joy and applause, New York passed a law allowing babies to be aborted (poisoned and dismembered) right up to full term. If they survive and are born alive, doctors can proceed further until the baby is fully dead. To rub this shameful act in the face of the country, the governor ordered major public buildings to be lit up pink. At the time, his own website boasted: “Governor Cuomo Directs One World Trade Center and Other Landmarks to be Lit in Pink to Celebrate Signing of the Reproductive Health Act.”

Celebrating the ability to kill an unborn baby? Really?

It’s horrific to think that a baby just hours from a healthy delivery can be killed. It’s no less horrific than if it were just a few divided cells on week one when specialized cells are beginning to form the heart, or when the child has an actual heartbeat at six weeks, or when they begin to suck their thumb at 12 weeks. More than 3,000 innocent lives are snuffed out EVERY DAY in the U.S. alone. How did we get to this point in this country?

Money. “For the love of money is a root of all kinds of evils (1 Timothy 6:10).” There is big money in abortion. Abortion providers such as Planned Parenthood dump large sums of money into the campaigns of politicians(1), spending $4.5 million on the New Jersey and Virginia governor’s races alone in 2018, and $20 million total earmarked by Planned Parenthood to influence the 2018 midterm elections.(2)

Deception. There’s a propaganda campaign of deception with politicians and abortion advocates having promulgated the lie that the life inside a woman is just “tissue” and not a sentient being… that it’s a life the woman has authority to either bring into this world or destroy. For political gain, power and posturing, our leaders have thus reduced a beating heart to a bundle of cells to be destroyed when inconvenient, branding it a women’s health issue for their political expediency.

But, I want to focus on the last: No Moral Anchor. The Bible and God Himself have been marginalized in the public square. The days of early America where the Bible was used as the primary text are replaced with agenda-laden textbooks that promote a “progressive” agenda of homosexuality, promiscuity and “tolerance” that says you better not take a stand. And when morality has no anchor or moorings, then culture and its leaders are free to define and redefine morality at will.

Consider the hugely conflicting stances from our government:

CONFUSED ON THE VALUE OF LIFE: Cheerfully supports and signs into law the “Reproductive Health Act,” essentially permitting abortions at any point during pregnancy.

Yet, in a tweet from August 2, 2018, Governor Cuomo said: “The death penalty is morally indefensible and has no place in the 21st century” and promised to advance legislation to “remove the death penalty from State law once and for all.”

TAKEAWAY: Death is OK for the innocent baby, but not a convicted criminal who committed a crime so vile, he or she is worthy of execution.

Speaker of the House, Nancy Pelosi:

CHAMPIONS ABORTION THAT DESTROYS GOD’S CREATION. In fact, Planned Parenthood’s own former president Cecile Richards stated last year, “Nancy Pelosi Is the Reason We Still Have Access to Abortion Rights.”(3) Pelosi herself stated this past month on the anniversary of Roe v. Wade, “the House will fight to protect and build upon the promise of Roe v. Wade.”(4)

Yet, just last Thursday, she tweeted, “We have a moral responsibility to protect God’s creation for generations to come. That is why today, we named members to the Select Committee on the Climate Crisis. #ActOnClimate.”

FOR KILLING UNBORN CHILDREN: In January, she argued a bill in Virginia that would allow abortion up to birth — even when a woman is in active labor about to deliver her child.(5)

AGAINST KILLING INSECTS: The same day, she introduced a bill to prevent the spraying of insects.(6)

These are just from recent headlines.

It’s clear to see that not holding to God’s Word as our country’s moral anchor allows us to sail further into harbors of sin, deception and destruction. It becomes a slippery slope of “anything goes” and directionless navigation from our leaders. The upcoming generations are raised to accept as normal something that just 30 years ago was unconscionable. Think it’s crazy and far-fetched? Wait another generation and it will become acceptable. Essentially, we hand down to generations a lawlessness of pursuing what fits the temperature of the culture which includes further devaluing life itself.

“Romans 1:19–24 (NLT) is fulfilled before our very eyes: ‘They know the truth about God because He has made it obvious to them…Claiming to be wise, they instead became utter fools…So God abandoned them to do whatever shameful things their hearts desired.’”

Have I not commanded you? Be strong and courageous. Do not be frightened, and do not be dismayed, for the Lord your God is with you wherever you go.

Don’t give up hope!

Read the Bible. The Truth is God’s Word. First and foremost, we need to be reading it. Give yourself the oxygen mask so you can help others. Learn about God and make your faith a solid relationship, getting to know the heart of Creator and one who sent His own Son to die in our place. If we’re not in His Word, our own morals risk decay rather than thrive from the renewal in Scripture. “Do not be conformed to this world, but be transformed by the renewal of your mind, that by testing you may discern what is the will of God, what is good and acceptable and perfect (Romans 12:2).”

Pray. We need to humble ourselves and get face down before our Creator. It’s not trite at all to say this and do it when we have access to the Throne Room of The Most High. The Verse, “If My people who are called by My name will humble themselves, and pray and seek My face, and turn from their wicked ways, then I will hear from heaven, and will forgive their sin and heal their land (2 Chronicles 7:14).” was never more pertinent than now and for this issue. I fear that if we don’t, our country will lose the hand of God’s blessing if it hasn’t already. Ask God to soften the hearts of our leaders to this issue and remove from office those who refuse to acknowledge the unborn as masterpiece works from the Creator.

Take action. This isn’t a political issue, it’s a faith issue. Psalm 82:4 says, “Rescue the weak and the needy; deliver them from the hand of the wicked.” Whenever you have the opportunity, stand for Jesus and stand for life. I think of a roommate in college who said his parents sat in their classroom in World War II Germany where one by one classmates would disappear. They all knew they had been taken to concentration camps, yet they all sat silent. I always wondered why, but likely it was because there was an unhealthy climate of fear. It was made acceptable, marginalizing those who wanted to speak up. The right thing is to help rescue those who were marginalized and had no representation. It took brave people to step in. The unborn are no different. Stand up for life at church, with friends and with whose finding themselves unexpectedly pregnant. Support a pregnancy center that offers Godly support to those in an unplanned pregnancy (there is likely at least one in your area). Encourage your pastor to speak from the pulpit. I challenge any pastor that claims this issue doesn’t deserve front row, Sunday morning attention to motivate the Church to action. He or she likely tackled 9/11 when 3,000 were killed in one day at the World Trade Towers, the Pentagon and the downed flight 93 in Pennsylvania.(7) Abortion is no different except that the more than 3,000 deaths … souls … happen DAILY.

Vote. Put into office those who uphold Biblical morals — not because we’re trying to create Heaven here on Earth, but because that standard works to thrive as a country and honors God. Know the difference between the Republican and Democrat party platforms. Read through and you prayerfully decide which more closely follows Biblical values. This link to Billy Graham Evangelical Association is dated, but still pertinent/helpful for major issues.

Contact Your Senator. Let them know through a phone call or email that you disagree with what New York is doing and you support Biblical principles. I did just two weeks ago. It took 60 seconds. Encourage them to pass laws to protect the unborn and cherish the miracle of life. Above all, ask them to reject any hint of legislation to adopt similar laws as New York in your state. Use this link to find their contact info.

The Church’s lack of fulfilling the Great Commission (Matthew 28:18-20) has resulted in darkness overtaking much of our world. We need to be bringing that light back into the public square, not daunted by the enemy’s advances because ultimately we know he is defeated. No question this issue is an outrage — our political “leaders” know exactly what they are doing by supporting abortion. However you speak out or act though, do it in LOVE. God is clear about that in His Word. Jesus Himself set that example by coming into the world not to condemn it, but to save it (John 3:17). If anyone had the right to condemn it, He did. So, let’s love, pray, and get involved. Who knows that this can be a huge opportunity God has given us to open doors and advance the Gospel.

Be sure to join us on social!

Just Not Feeling It

The Pilgrim’s Progress
Scroll to top