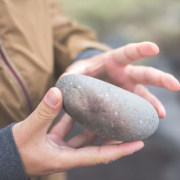 Jesus Hung Around the Perfect Audience.

Did you catch Lauren Daigle’s appearance a few weeks ago on The Ellen Show? It was stunning—absolutely perfect musically and vocally. I was excited at the impact of the exposure of a Christian artist and the Gospel on that show might have. That excitement wasn’t shared by everyone though as I later learned from a post by The Wally Show (Way FM) that a pastor’s wife had called Wally up asking, “Why would a Christian artist like Lauren Daigle go on the show of a Godless sinner like Ellen?”

Truth is, Jesus hung around sinners.

Jesus wasn’t afraid to get in the trenches to reach people. He hung around the perfect group of people that needed Him — imperfect people, bad hombres. For Him, this was a rescue mission. In fact, Jesus said in Mark 2:17, “It is not the healthy who need a doctor, but the sick. I have not come to call the righteous, but sinners.” He was here to redeem the lost sheep — those who had strayed from God — you…me.

What if God didn’t reach out to you?

Were you and I always perfect and sinless? No. But, that’s the requirement for us to engage and dwell with a holy God. That’s a bit Christianese, but basically, it’s all good. In fact, that’s where Christmas comes in: God gave His Son Jesus to redeem our bad stuff and allow Him to dwell with us. His Spirit is part of every Christian. We’re all familiar with John 3:16. But, it’s the Verse next door (John 3:17) that gets overlooked all too often: “For God did not send his Son into the world to condemn the world, but to save the world through Him.”

We were bad dudes (and dudettes) prior to being washed snow white. List the sin you think is the worst. It doesn’t matter — it’s all sin and separates us from God if we don’t have have Jesus as our Savior.

You see, at just the right time, when we were still powerless, Christ died for the ungodly.

That’s Ellen, that’s you, and praise God that’s me.

What is being a Christian?

For years, I’ve heard it explained as “asking Jesus into your heart.” That’s one way to put it, but honestly, it’s a commitment to follow God with all your heart. Romans 10:9 puts it this way: “If you declare with your mouth, ‘Jesus is Lord,’ and believe in your heart that God raised Him from the dead, you will be saved.” His death on the cross paid the penalty for our sin (all the wrong things). Don’t feel weighed down by all the wrong stuff you’ve done in your life — that you’ve got to somehow clean things up before you come to Him. Do it right where you’re at and commit to following Him with all your heart. Here’s a suggested prayer:

“God, I’ve sinned in my life. I know I’m not perfect. I want to claim Your promise in Romans 10:9 by believing that Jesus is Lord and that He died in my place for my sins. And, that He rose from the dead. I invite you to be the Lord of my life. Thank you for saving me. I know I’m loved — you wouldn’t have sent your Son to die in my place if that wasn’t the case. Fill me with Your Spirit to show me the steps to take in my new journey with You. Amen.”

A special thanks to The Wally Show and Wally in particular for fielding the call from that pastor’s wife and using that to provide a healthy perspective. If you’ve never listened to The Wally Show, you can find them on WAY-FM weekday mornings.

Healed By Grace 2 on DVD

Just Not Feeling It
Scroll to top